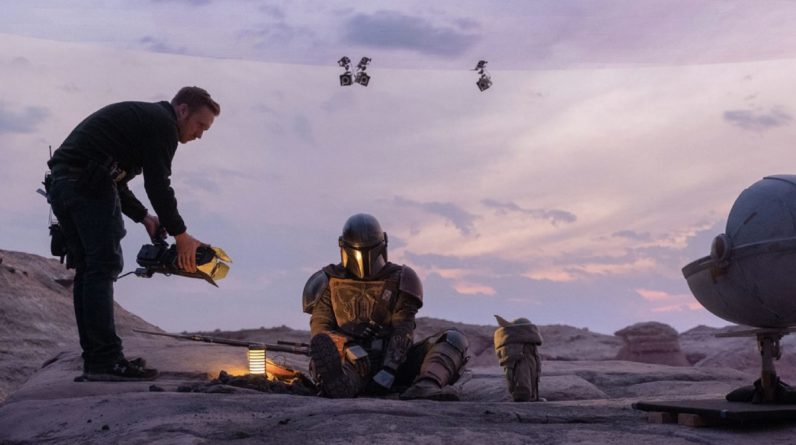 The biker stopped looking at the landscape of jagged rocks rising into the sky. Is this a natural landscape? Does the man really stand in it? You have no doubt. Sky-gray is reflected in his hair, his leather jacket, rock and sky are reflected in his sunglasses and chrome from his instrument.

But then a technician climbs next to him with a remote control. And in it TestFilm, Which can be seen on YouTube, the whole sky begins to rotate, the sun moves, the light on the rocks changes with it, and the shadows also move. Two seconds later, the biker stands in the final daylight in front of a dramatic evening sky. And everything looks exactly as before.

What the filmmakers did not sacrifice for the perfect outdoor shot: transporting tons of camera gear to veritable rocky landscapes, challenging sandstorms, disease and bandits, and waiting days with a great team for the perfect evening vibe – all for a few seconds into the movie. And how many times did David Lynn want a device that could control the desert sun in Jordan while filming “Lawrence of Arabia”?

As if for the sake of mocking a hundred years of torture in filmmaking, now a second art comes into the picture. It does something with the mouse – and suddenly an impressive rocky tower weighing tons moves in the middle distance, not fitting well into the composition, wandering through the image and finding a new spot on the left edge of the image. It stands there now, as if it were deceptively realistic portraits as before, as if the weather here in a thousand years has truly carved it out.

The joke is that you can’t see any manipulation anymore

A revolution is happening in Hollywood right now, largely unnoticed by the general public. It’s still in its infancy, but its first results, which you can currently see in the series “The Mandalorian” on Disney +, point the way: There has been a breakthrough in special effects that can no longer be stopped. And the joke is that you can no longer recognize the manipulation at all.

Because in “Mandalorian” it really looks as if the title character, a bounty hunter from the “Star Wars” universe with shiny chrome shield, is photographed for each episode in a new desert, a new marshy landscape, a new mountainous rocky region. And in real life, with expensive trips to amazing faraway places. At best, regular people thought this series should have an unlimited budget. However, the experts led their eyes during the first few episodes.

Sure, of course, the movie industry fakes always takes it up, transporting actors to deserts, rocky landscapes, or anywhere else they’ve never been to before. This was usually done in halls, where artists painted landscapes in the background on the wall. Then later with the installation process: The star is photographed in the foreground in front of a green wall, then the green was replaced by desert images. With computers, it just got easier and easier over the years.

It is very easy at one point to describe the filmmaking years from the 1990s to the present as the era of the green screen. The actors did full-length movies in front of green studio walls Frog’s anywhere – and they had to think about everything else. Sometimes the amazing backgrounds were added sometimes, sometimes the silly only afterwards in the computer.

To protect your data, it has not been downloaded without your consent.


I agree to show me YouTube content. In this way, the personal data is transferred to the portal operator for usage analysis. You can find more information and the possibility of cancellation under sz.de/datenschutz.

This external content is uploaded automatically because you agree to it.

Revoke approval and reload the page


In this era, pixel payers are ruling in front of their screens, post-production kings with their assembly line operations from New Zealand to Munich. But they did not rule well as a rule. Most of the films from these workshops still have a hidden flaw, but unfortunately it cannot be eliminated. You can feel it Fakes In the intestine, more than one finger can point to it.

But “The Mandalorian” has a different aura. You think you see real Tunisian desert dust, as in the early Star Wars movies with George Lucas, which were filmed on location. You think you are on real adventure travels with a big camera, just like David Lin back in the day. The practicing eye, which has always been cynical about all developments, is looking for a flaw Fakes – He can’t be found anymore.

Fantastic worlds are created again in camera, just as in prehistoric times in cinema

Because, and this is the main difference, these images are not simply assembled by computer pixel pushers. Created classically, as in prehistoric cinema. Directly into the camera. The moment of recording the moment the actor performed. At first glance, this revolution looks almost old-fashioned – like a step back to its roots.

But at second glance, it is a quantum leap in technology. The Mandalorian and his colleagues acted in a new dome light, affectionately called “The Volume” in Lucasfilm. Measuring 23 meters in diameter, nearly six meters in height, it is fully lined with 1,300 state-of-the-art high-definition and ultra-bright LED displays – resulting in billions of individual LEDs.

For a simple comparison, one can think of a 360-degree cinema, known from Disneyland or other theme parks, where the image completely surrounds the viewer. The desert, including the sun in the sky, is shown on screens around the actors – and lights them at the same time. Everything looks so sharp and real instantly that all you have to do is start shooting. Until full immersion – not later in the cinema, but already on set.

Where it shines in this dome is more than just a two-dimensional desert panorama. Something like this will be detected quickly with every movement of the camera as it does not shift in perspective. The desert world behind the LED screen is not based on a single image but on thousands of desert images and has a 3D data structure stored in what is called an “unreal engine” which creates a feeling of moving smoothly across 3D worlds even in computer games.

This program ensures that each rock has its own shade that can move with the light source, and that the part in the foreground turns more than mountains on the horizon when the camera moves. This artificial desert behaves just like a real desert in front of the camera, except that you can move its rocks with the click of the mouse, and change the position of the sun and clouds in the sky. Dream of a world of images that can be manipulated in real time – it has never been closer.

It is not easy to manufacture such illusory worlds. For their pioneering work with “Mandalorian,” a number of leading film companies had to come together to build “The Volume”: first and foremost, Industrial Light & Magic, the special effects company founded by George Lucas. But also Epic Games, the rulers of the Unreal Engine, as well as Golem Creations, Fuse, Lux Machina, Profile Studios, NVIDIA, and the Munich Camera Professionals from Arri.

They called their co-creation Stage Craft, and the technology has now reached the point where it’s rapidly expanding. Soon there will be two domes of light in Los Angeles, a third at Pinewood Studios in London, and a fourth at Fox Studios in Australia, where the Marvel movie “Thor: Love and Thunder” will be filmed. Plus, there are domes that can be erected everywhere if needed – George Clooney actually used one in his Netflix movie “The Midnight Sky”. This is how new standards are created.

To protect your data, it has not been downloaded without your consent.


I agree to show me YouTube content. In this way, the personal data is transferred to the portal operator for usage analysis. You can find more information and the possibility of cancellation under sz.de/datenschutz.

This external content is uploaded automatically because you agree to it.

Revoke approval and reload the page


The consequences for filmmaking will be huge. First of all, with superhero movies, fantasy and science fiction movies set in front of fictional landscapes that must be artificially created. The actors are very happy about it. After decades in front of green screens, they’re finally allowed to see the things they’re supposed to interact with again – almost kind of a release. But it won’t stop there.

Real landscape shooting is now in danger, too. Give the photographer the opportunity to shoot all day in the most beautiful evening light, without the time stress of the vanishing sun. You won’t want to do without it anymore. Give the product the security that from now on the weather does not matter, the travel expenses will be eliminated and the hotels will not be able to curb it. Will he say no? Thanks to the “volume” only, it was possible to shoot the second season of “The Mandalorian” despite Corona, and in record time.

In this new movie world, drastically less plywood is used

Even the production designers, who have to make major adjustments, can become fans of the new Celestial Window. With “Mandalorian” they immediately started building their collections digitally, as 3D graphics in a computer. Only the tables, chairs, and bar counters that the actors had direct contact with were real. Ceilings and walls – for example in Bounty Hunters’ Bar or in Werner Herzog’s dungeon – were shown on LED screens. It immediately seemed so compelling that no intergalactic dirt noticed it.

Sure, in this new world of movies, you’ll need drastically less plywood, huge studio halls might become superfluous, and movie joiners won’t have much to do in the future. However, the job of the digital group builder will be more demanding, as the restrictions on money, materials, space, and load are suddenly no longer applied. For relatively little money, anyone can now become as extravagant as the legendary James Bond designer Ken Adam and turn extinct volcanoes into a seat of evil.

But it is perhaps the best: after the work is done, the entire collection is saved to the hard drive and can be recovered at any time. You instantly imagine brand new markets: Expensive products selling their perfect digital backgrounds to B-Pictures for second and third use. Sole company scans 3D landscapes at the most beautiful points on Earth and resells data to film companies. And the historically interested who recreated Berlin from 1933 ideally like 3D graphics so that all future Nazi films could play it.

Will there be filmmakers in the end who will insist on the ancient craft, and continue to insist on traveling the world with large crews and building massive sets of plywood, even if no viewer can see the difference? But certainly. Christopher Nolan and Quentin Tarantino, who still, even after the complete victory of digital cameras, fight tirelessly to preserve the film’s grain, would be perfect candidates for this.