Some players are wondering if Blizzard shouldn’t better regulate the GDKP system on World of Warcraft. This system, designed by players for capture combos, is very popular on some servers and can be found in both WoW and WoW Classic.

But what is GDKP? It’s a system explicitly developed for combos and raid captures, i.e. players who don’t know each other. With GDKP, the principle is to auction all items dropped during the raid. We review the items and it is the best offer that wins every time. Once all items are sold, gold winnings are collected by Raid Leader and then redistributed equally among all raid members.

The system has fairly specific rules. If you play poorly or play AFK for example, you can be kicked out of the raid or lose a piece of your pie.

If this is not to everyone’s taste, GDKP raids have their advantages. Thus some well-equipped players can be attracted by the gold jackpot and each player focuses on playing at their best under the risk of losing the winnings from the final jackpot. It also encourages players to stay until the end of the raid and you are free to bid on your alternatives, and no one is stopping you.

The reason I’m telling you this is because a player asked WoW Classic Lead Brian Birmingham if Blizzard is planning to ban GDKP raids. This is his response:

Not currently. I understand your concern, but there is nothing inherently wrong with using gold to bid on items. It can be fun to watch new characters bid big, but there’s no guarantee that gold won’t come from a surrogate or friend.

READ  How Technology Will Affect The Development of Online Casinos

In short, Blizzard should not interfere or interfere with GDPK raids. It must be said that they have been around for a long time, including in Europe (we found them already at the end of the 2000s), and that if a blizzard had to intervene, it probably did. 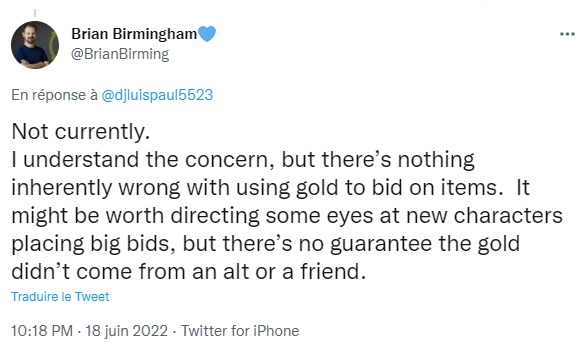