“Like a cat who got cream,” the study says: Animals experience emotions very similar to humans – display positive moods when they “win” and pessimism when they “lose.”

Written by Ian Randall for Mailonline

A study shows that animals exhibit positive moods when they “win” and pessimism when they “lose” – indicating that they experience emotions just as we do.

In a review study, experts from Belfast used the example of animal competitions – for limited resources, or companions – to argue that emotions influence animal behavior.

Scientists who study animal behavior have traditionally not taken into account the role of emotion – something that is difficult to accurately measure in an animal.

However, the team concluded that the animals behave differently after the results of the competition – with those that lose, for example, developing a negative emotional state.

This, in turn, causes them to evaluate their chances of winning future fights more gloomily – and may dissuade them from engaging rivals.

On the other hand, winners develop positive moods that have the opposite effect.

Emotion can also guide non-reflexive behaviors of animals in other contexts outside of competitions – from reference to mate choice and parental care.

In light of this, the results may have implications for animal welfare, and how this could be improved, the researchers note.

A study shows that animals exhibit positive moods when they “win” and pessimism when they “lose” – indicating that they experience emotions just as we do. In the image, the content screenshot

Human emotions influence unrelated cognition and behavior. For example, people generally rate their satisfaction with their lives on sunny days more than on rainy days, says author of the paper and animal behavior scientist Andrew Kramp of Queen’s University Belfast.

The team argued that similar phenomena could be seen in animals.

We have found that animals’ emotions also influence unrelated cognition and behavior. For example, animals that won a competition experienced more positive moods and expected fewer predators in their habitat.

Likewise, animals that lost in a contest experienced negative emotions and participated in fewer competitions in the future. These transition effects may lead to maladaptive behavior.

“The stimuli or events that elicit emotional reactions can influence nearly any decision – potentially having life or death consequences,” said Dr. Kramp.

For example, is rustling foliage predatory or windy? An anxious animal would likely interpret the theft as a predator and run away.

This mood is adaptive when anxiety is relevant, for example, if it is the result of a previous experience of predatory attacks.

“But the mood is incapable of adjusting if it is caused by something else – for example, losing a competition.” 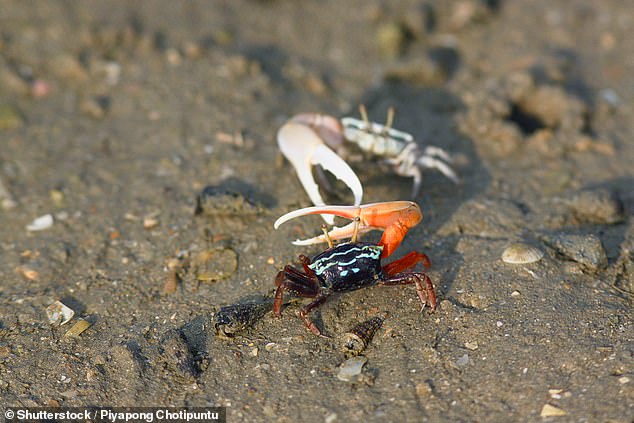 In a review study, experts from Belfast used the example of animal competitions – for limited resources, or companions – to argue that emotions influence animal behavior. In the photo, a crab is fighting jockeys. According to the new study, a winner will develop a better mood and will rate his chances of success in future competitions even higher

The results of this study show that this may need to be considered since the role of animals’ emotion is crucial in terms of understanding their subsequent behavior.

Thus, understanding the emotions of animals and why they developed will help us measure and improve the emotional state and well-being of animals.

The full results of the study have been published in the journal Proceedings of the Royal Society b.

In New Zealand, Parliament chooses to play haunting music to disperse protesters, and the crowd begins a macarena dance.