New measures, new reports, and highlights: An update on the latest developments in the Covid-19 pandemic around the world.

International aid continues to arrive in India, which is struggling with a violent second wave of the Covid-19 virus: 28 tons of medical equipment promised by France arrived in New Delhi on Sunday aboard a specially chartered cargo plane, according to Agence France-Presse. The assistance includes eight large capacity oxygen generators, 28 ventilators and 200 electric injection pumps.

For its part, the United Kingdom will send a thousand additional respirators to this vast country of 1.3 billion people, which has recorded nearly 400,000 new infections during the past 24 hours, and recorded 3,689 deaths every day.

Ending travel restrictions and partial return of middle and high school students to class: Restrictions linked to the Covid-19 epidemic will begin to fade away on Monday in France, against the backdrop of a slow decline in hospitalization cases.

On the eve of this first stage of dislocation, the number of Covid-19 patients in intensive care units settled on Sunday at fewer than 5,600, after several days of slow decline, according to French public health figures.

– Mexico: the first case of the Indian type –

On Sunday, the health authorities announced the discovery of the first case of the Indian Coronavirus in the state of San Luis Potosi (central north). The World Health Organization had indicated last week that this alternative, which is suspected of having plunged India into a major health crisis, has been detected in “at least” 17 countries.

Health authorities announced that Nigeria will restrict access to its territory for all foreign travelers who have resided in Brazil, India and Turkey in the past two weeks, in order to limit the spread of the Corona virus.

Nigerian citizens and permanent residents who visited one of these three countries in the last 14 days will be required to undergo a mandatory one-week quarantine upon arrival at a government approved facility.

South Africa, where the Covid-19 vaccination campaign has been delayed, on Sunday evening is receiving the first batch of a total of 4.5 million doses of vaccines from the US Pfizer laboratory.

Belgian police arrested 132 people on Saturday during the dispersal of a ceremonial gathering against sanitary restrictions in a park in Brussels, which authorities have banned, according to an official report published on Sunday.

– The United Kingdom: Its Impact on International Aid –

British Foreign Secretary Dominic Raab on Sunday justified the reduction in international aid from the United Kingdom on the economic impact of the Coronavirus crisis.

Boris Johnson’s government decided to reduce development aid from 0.7% to 0.5% of the national wealth in 2021. It increased from about 15 billion pounds before the crisis to 10 billion pounds.

The pandemic has killed more than 3.19 million people worldwide since the end of December 2019, out of more than 152 million confirmed infections, according to a report released by Agence France-Presse on Sunday.

READ  Putin had cancer surgery: who is Nikolai Patrushev, the "Kremlin hawk" who could replace the Russian president? 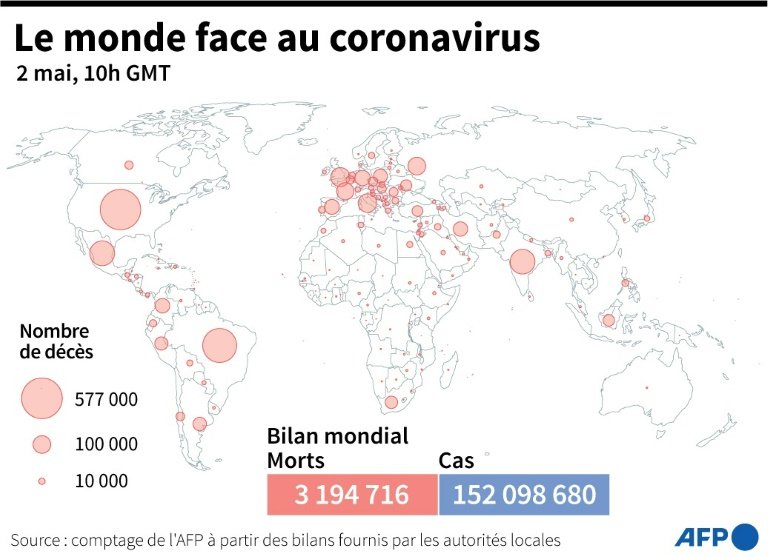 These figures are not insignificant at the global level. It is based on daily reports from national health authorities, without including statistically based reassessments.

In Argentina, the number of Covid-19 cases on Sunday exceeded the 3 million mark since the start of the epidemic, for a total of 64,252 deaths, according to figures from the Ministry of Health.

At least 1.154 billion doses of anti-Covid vaccines have been given in at least 209 countries or territories, according to an AFP tally from official sources on Sunday at 5.30pm GMT. On average about twenty million doses are given each day.

In the United States, the serious consequences of drying Lake Mead

Italy declares a state of emergency in five northern regions

Check the hours posted by the academy this Tuesday