With an average of 8,000 new infections per day, Belgium is returning to a virus prevalence rate unreached for a year.

Hospitalization follows the same trend: There are 2,000 Covid patients in Belgian hospitals, a level not seen in the country since May.

On Wednesday, health ministers (federal and federal entities) recommended a booster dose of the vaccine for everyone, not just those over 65 and their caregivers. The terms of this “generalized vaccine + booster + plan” must be defined by the end of November.

About 900,000 American children aged 5 to 11 have received their first dose of Pfizer’s Covid-19 vaccine since the campaign for that age group was launched a week ago in the United States.

This is a “good start,” the White House’s coordinator for epidemiology, Jeff Zents, said. The United States has 28 million children between the ages of 5 and 11.

The German Vaccines Committee (STIKO) on Wednesday recommended that those under 30 be vaccinated with the only vaccine from Pfizer-BioNTech, which risks developing myocarditis for this population due to Moderna. This recommendation also applies to pregnant women.

The French-Austrian laboratory Valneva and the European Commission announced that they have reached an agreement on up to 60 million doses of a vaccine against Covid-19 by 2023.

Organizers of the Shanghai Marathon, scheduled for November 28, announced that it has been postponed, as happened in Beijing and Wuhan last month, due to a limited recovery in the COVID-19 epidemic in China.

The number of infections in the country remains low – an average of 74 cases over the past seven days according to official figures – but Chinese authorities are following a zero-contamination policy within three months of the opening of the Beijing Winter Olympics (Feb 4-20).

– March without a distance: arrests in China –

Chinese police have ordered the pre-trial detention of three people, who were presented as organizers of giant screen broadcasts of the global video game League of Legends final, official newspapers said.

The esports competition, which was held on Saturday in Reykjavik (Iceland), was broadcast in a crowded area of ​​Wuhan (center), and attracted at least 2,000 people according to Chinese media. This huge gathering was organized without permission and without space.

Four lions from a Singapore wildlife park have tested positive for the coronavirus after being infected by staff and with symptoms such as coughing and sneezing, authorities said.

The Southeast Asian city-state is facing its worst pollution wave since the start of the epidemic with about 2,000 to 3,000 new cases per day.

The pandemic has killed more than 5,062,911 people worldwide since the end of December 2019, according to an AFP report released Wednesday midday. 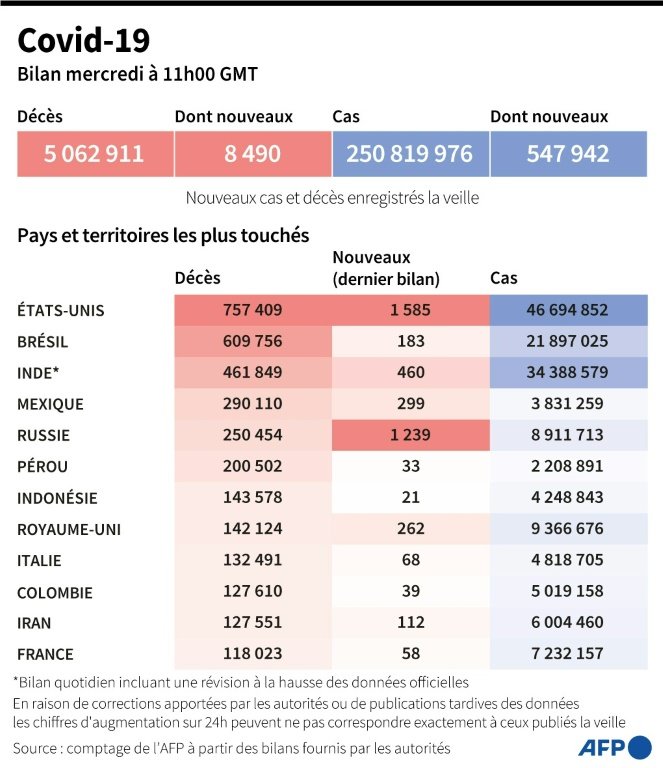 The World Health Organization estimates, taking into account the increase in deaths directly and indirectly related to Covid-19, that the epidemic toll could be two to three times higher than that officially established.

Sub variants BA.4 and BA.5 could lead to a further increase in the number of cases in Europe

By Scott Matthews 2 hours ago

By Scott Matthews 10 hours ago

In China, the city of Shanghai announced the reopening of businesses “in phases”, after more than a month of severe confinement

By Scott Matthews 18 hours ago

Mohamed bin Zayed was elected president by a Supreme Council

Postponing the formation of a new government for as long as possible is a strategy for Emmanuel Macron, reassures his entourage