– End of free exams in Germany –

The German government and regional countries decided on Tuesday to end free Covid-19 screening tests on October 11 in order to relaunch a vaccination campaign that had begun to slip.

From that date, people who do not want to be vaccinated will have to pay for a test that proves negative for Covid-19 in order to be able to go to the cinema, restaurant or gym.

Mexican Foreign Minister Marcelo Ebrard said on Tuesday that the United States will deliver 8.5 million doses of the Moderna and AstraZeneca vaccines to Mexico.

People who wish to attend English Football Championship matches will be randomly screened at the entrance to the stadiums and must show evidence of Covid-19 vaccination or a recent negative test.

This measure will be applied from the start of the 2021-22 season of the English Premier League, which is scheduled to start its opening match on Friday between promoted Brentford and Arsenal.

The province’s health minister, Christian Dube, announced Tuesday that Quebecers wishing to eat in a restaurant, go out to the pub, go to the gym or attend a festival, will have to present a vaccination passport from September 1.

Guinea announced, on Tuesday, the strengthening of health controls at the borders, the obligatory wearing of masks and the closure of nightclubs in order to combat the Covid-19 epidemic.

Facebook has dismantled a Russian disinformation that sought to discredit AstraZeneca and Pfizer/BioNTech’s Covid-19 vaccines, including by seeking to show that the former “turned vaccinated people into chimpanzees.”

The World Health Organization on Tuesday urged 20 leaders with the power to reverse the “shameful” global imbalance in access to Covid-19 vaccines to step in to reverse the trend before October. “There may be twenty people in the world who are playing a critical role in solving this equity problem,” said Bruce Aylward of the World Health Organization during a live interaction on WHO social media, as he reflects on business leaders and heads of state.

– Worrying situation in the West Indies –

Infection rates ‘never known’ in France since the start of the Covid-19 epidemic, strict confinement in Martinique, possible in Guadeloupe: the health crisis ‘extremely serious’ in the West Indies, where Foreign Minister Sebastien Licornu begins a ‘crisis visit’ on Tuesday .

The health situation is also critical in French Polynesia where the authorities announced the re-introduction of a night curfew from Wednesday from 9:00 pm to 4:00 am. 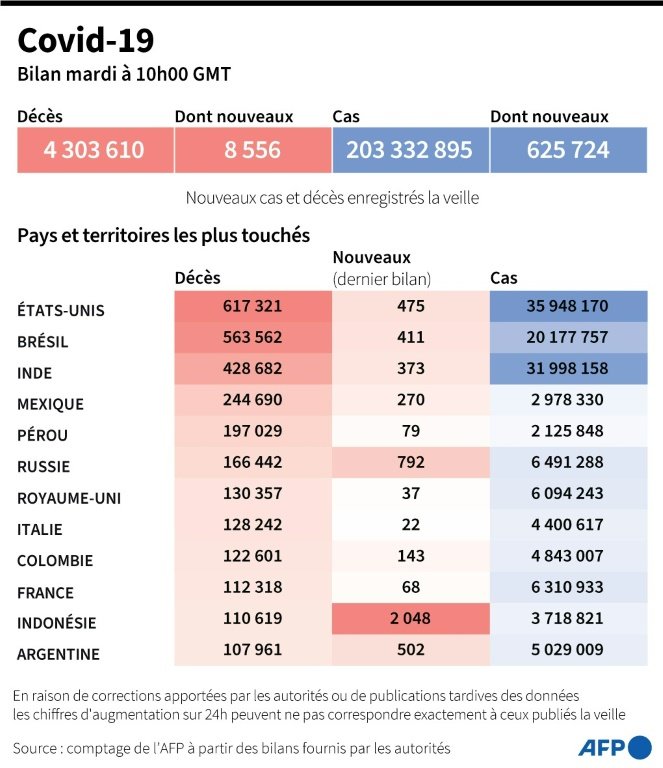 The epidemic has killed at least 4,303,610 people around the world since the end of December 2019, among more than 203 million infections, according to a report prepared by AFP from official sources on Tuesday at 10 am GMT.

The World Health Organization estimates, taking into account the increase in deaths directly and indirectly related to Covid-19, that the epidemic toll could be two to three times higher than the official figures.

Muscular environmental controversy, conflict between Algeria and Morocco, and tensions over Mbappe during the match between FC Metz and Paris Saint-Germain

Covid-19: Less than a month after its implementation, canceling tests turns into a mystery