Leaders of the major economies of the Group of Twenty (G20) agreed Saturday in Rome to minimum taxes for multinational companies, while Europeans and Americans reached a truce in their struggle for steel. But talks are going so far as to reach a climate agreement.

A senior White House official said Saturday night that some elements of the final climate statement are “still under negotiation.”

Although progress could still be made by the end of the meeting on Sunday, some working versions of the press release being negotiated have raised concerns among NGOs that the G20 would not go much further than the promises already made during the meeting. The Paris Agreement, and does not commit to a clear timetable for achieving the goal of “zero emissions”.

An outcome that will be particularly disappointing, as COP26 opens in Glasgow on Sunday. It will bring together a wide range of countries, but the G-20, which includes developed countries such as the United States and members of the European Union, but also large emerging economies such as China, Russia, Brazil or India accounts for 80% of global greenhouse gas emissions.

Italian President Sergio Mattarella again appealed on Saturday evening at a dinner for the leaders of the Group of Twenty: “We must not leave to those who come after us a planet afflicted by conflicts, its resources wasted.” He stressed that “the responsibility lies with us to make a decisive breakthrough to overcome these burdens. The time has come. The eyes of billions of people, entire peoples, lie with us and the results we can achieve.”

Several thousand people are still demonstrating for the climate on Saturday afternoon in the streets of Rome.

The President of the European Council, Charles Michel, had admitted earlier that the question is difficult, especially for “some countries that depend on coal.”

Many emerging countries, notably China — whose President Xi Jinping speaks only in Rome by video link, like his Russian counterpart Vladimir Putin — are still highly dependent on this carbon dioxide-emitting fossil fuel, particularly to power private power plants. them in the context of the current energy crisis.

“What we really hope to achieve is the G20 commitment to end international coal financing,” the senior US official said Saturday night, also calling for “positive rhetoric on decarbonization (..) from the energy sector” and commitment by “more countries” to reduce methane emissions. It is another major greenhouse gas besides carbon.

In the near future, heads of state and government have given the final green light to reform the global tax system, which in particular provides for the introduction of a minimum tax of 15% on multinational companies, with a view to implementation by 2023.

This “historic agreement,” in the words of US Treasury Secretary Janet Yellen who announced it on Saturday, will be formally adopted in the closing statement of the G20 on Sunday. 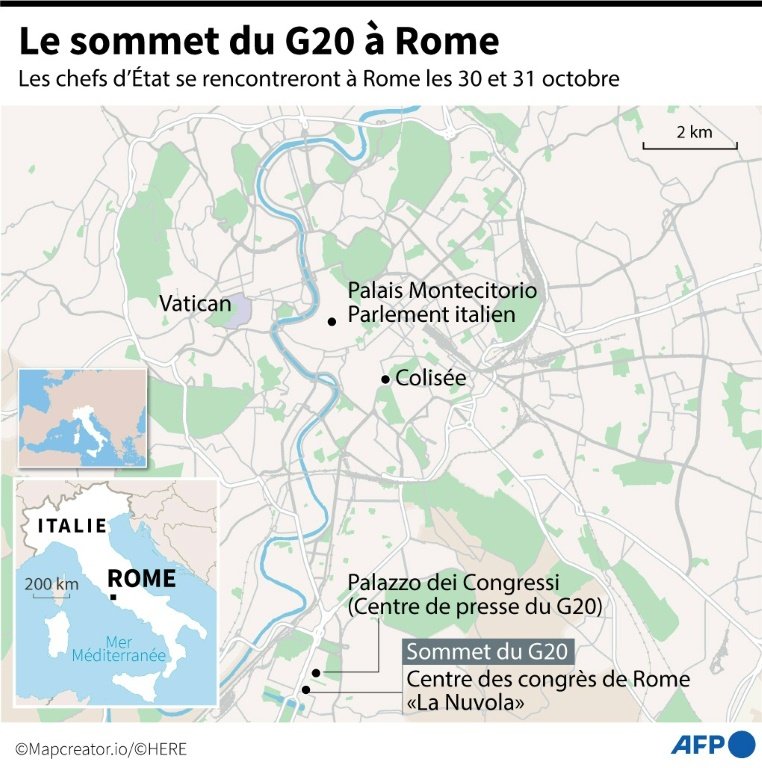 READ  Donald Trump sends a warning to the Republican Party

In Rome, US Commerce Secretary Gina Raimondo unveiled another “historic” agreement, this time to raise some tariffs on steel and aluminum imports that have plagued trade relations between Washington and Brussels since the Trump administration imposed those taxes. This is to allow “limited quantities of European imports of steel and aluminum to enter the United States duty-free.”

European Trade Commissioner Valdis Dombrovskis confirmed the truce on Twitter, and said the deal would be officially announced on Sunday by Commission President Ursula von der Leyen and US President Joe Biden.

A US official announced on Saturday that the latter plans to meet his Turkish counterpart Recep Tayyip Erdogan that day, against the backdrop of tensions between these two NATO allies.

Emmanuel Macron will discuss his side one-on-one with British Prime Minister Boris Johnson, who complained to Ms von der Leyen on Saturday about Paris’ “completely unjustified” threats over fishing licenses after the canal.

After a diplomatic offensive with several European leaders, Argentine President Alberto Fernandez, for his part, was able to congratulate himself on Saturday on a “good meeting with the Managing Director of the International Monetary Fund, Kristalina Georgieva, to advance the negotiations” on the debt rescheduling of the South American country. , which he says he is approaching “firmly”.

“If you see me crying”: What are the “stones of hunger” that have recently re-emerged due to drought?

By Scott Matthews 54 mins ago

26 people died due to the fires that affected 14 departments, according to the Algerian Minister of the Interior