The Cité des sciences invites you to space this June: two new shows for schoolchildren at the planetarium – “Ready to Take Off” and “See the Universe from Earth” – and an extraterrestrial weekend, available for free. in June. Participate in workshops with the opportunity to chat with specialists and even write interstellar letters.

New shows in the planetarium 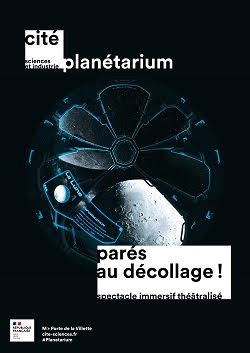 The planetarium transforms into a spacecraft and presents two new 30-minute shows. “Ready to Take off” invites 5-year-olds and their companions on an immersive journey across the solar system for a mission of great importance: the Voyager 1 probe was sent into space 43 years ago, risking everything when it’s time to stop, it must be found and urgently recharged. This is the opportunity to approach the Moon, the International Space Station, Mars, Jupiter and Saturn, before joining the probe. The show is organized into five sequences, punctuated by surprising discussion times and anecdotes. During this voyage, the captain provides viewers with scientific information about the solar system, using surprising quests and anecdotes. This original film allows the audience to slip into the skin of an astronaut.

Seeing the Universe from Earth explores the history of astronomy and reveals to the audience how science interprets the night sky. It invites us to understand the movement of stars, the phases of the moon, the formation of galaxies, the birth of the northern lights … This information is becoming more and more accurate thanks to the use of giant telescopes that allow us to go back more than 100 million years, after the Big Bang. But there are still mysteries and exploration going on. Every spectator wears astronaut shoes during an amazing flight.

Free extraterrestrial weekend. In the program there are mediations, videos of artists, a round table and even the ability to write interstellar messages! Hello Earth Conferences: Do you have a message? » Allow researchers to meet and discuss on the topic of interstellar communication. These scheduled events must be reserved in the hall.

“Let’s Talk Aliens” is scheduled in the Free Access Hall on Saturday, June 26 and Sunday, June 27 non-stop, from 2 p.m. to 5 p.m. The public is invited to come and discuss intelligent extraterrestrial life with science facilitators at Cité des sciences et de l’Industrie. In the program, build sky maps, locate exoplanets, evaluate knowledge about the search for life in the solar system, and take an interest in the wonderful organisms that are tardigrades.

Treaty on the High Seas: Resumption of negotiations to try to protect a vital treasure

The Gironde forest fires: the massive devastation of the fires seen from space