Again this year, New Zealand exported more fresh fruits and vegetables. In terms of value, we are talking about almost $3 billion, up 11% from 2020. In 2017, this figure was $2 billion. Kiwi put the picture very well. This product represents two thirds of this year’s total. New Zealand’s kiwifruit exports (FOB) will be valued at $1.92 billion. Here’s what Jan Kees Bonn wrote from Fruit and Vegetable Facts.

Kiwi is the only reason for the increase
In quantitative terms, New Zealand’s exports of fresh fruits and vegetables increased by 2% compared to 2020. The country will set a new record of 1.54 million tons. This increase is entirely due to the kiwi fruit exports which continue to increase; This year by about 10% to 718 thousand tons. In 2017, this value was 516 thousand tons. More than half of New Zealand’s kiwifruit exports go to South and East Asian countries. The 27 EU countries account for 36%.

more and more golden kiwi; Especially towards South and East Asia
The growth of the sector is mainly due to exports of golden kiwi fruit (yellow flesh), which now constitute almost 60% of the total, compared to 45% in 2017. In terms of volume, we are talking about 420 thousand tons, compared to 225 thousand tons. In 2017. Green kiwifruit exports were also slightly higher this year than they were in 2020. However, these quantities were already higher in 2018.

By comparison, New Zealand sends many yellow kiwis to the countries of South and East Asia. China and Japan are particularly important buyers. An increasing number of golden kiwis also go to the countries of the European Union, which will receive 110,000 tons of this breed. In 2020, these quantities amounted to 90 thousand tons. But EU countries continue to import more green kiwifruit than yellow ones. Over the past three years, New Zealand has shipped about 140,000 tons of green kiwifruit to the European Union. 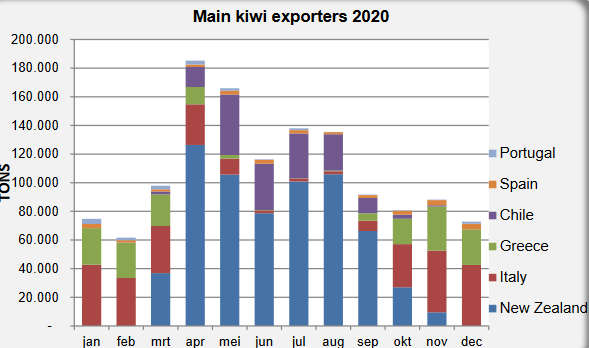 Mine
2021 was the year of moderate exports of apples. This is New Zealand’s second largest export product. This year, apple shipments abroad will reach only 404 thousand tons. This is a decrease compared to the previous three years. In 2020, this volume reached 440 thousand tons.

In addition, New Zealand sends more and more apples to the countries of South and East Asia. This year more than ever, exports to this region accounted for 54% of New Zealand’s total apple exports. In 2017, this value was less than 40%. China, Vietnam, Taiwan and India are the main destinations in this region.

137,000 tons of Gala apples have been reached. This year they fell below 120,000 tons. It lags behind Fuji Apple, Envy, Braeburn, Jazz, Pink Lady, Pacific Queen. Exports of new breeds such as Rockit, Dazzle, Honeycrisp and Koru are very modest at the moment.