After hitting the Caribbean, Storm Elsa intensified into a hurricane and headed for the Florida coast on Tuesday night, as relief workers at Surfside near Miami raced to dig through the rubble of a building whose collapse killed at least 36 people.

At 11:00 p.m. local time Tuesday (3:00 GMT Wednesday), Elsa was, according to the National Hurricane Center (NHC), just in front of Tampa Bay, with “heavy rain and wind gusts spreading inland into the southwest and midwest. Florida “.

With winds of up to 120 km/h, the NHC decided on Tuesday evening to change its status to a Category 1 hurricane (out of five) on the Saffir-Simpson scale.

The commission said earlier that Elsa, which is moving north at 22 km/h, “is expected to make landfall along the northern coast of Florida on Wednesday morning before advancing into the southeastern United States on Thursday.”

Florida meteorologists say the storm is bringing with it a flood of rain and some potential hurricanes.

In the northwestern part of the peninsula, the water can also rise up to 1.5 meters due to the winds.

– Residents are encouraged to prepare –

“We call on Florida residents to begin their preparations, and this includes being able to be without electricity for a few days, and providing enough food and water for each member of their household,” Janet Nunez urged on Tuesday. Florida Governor. 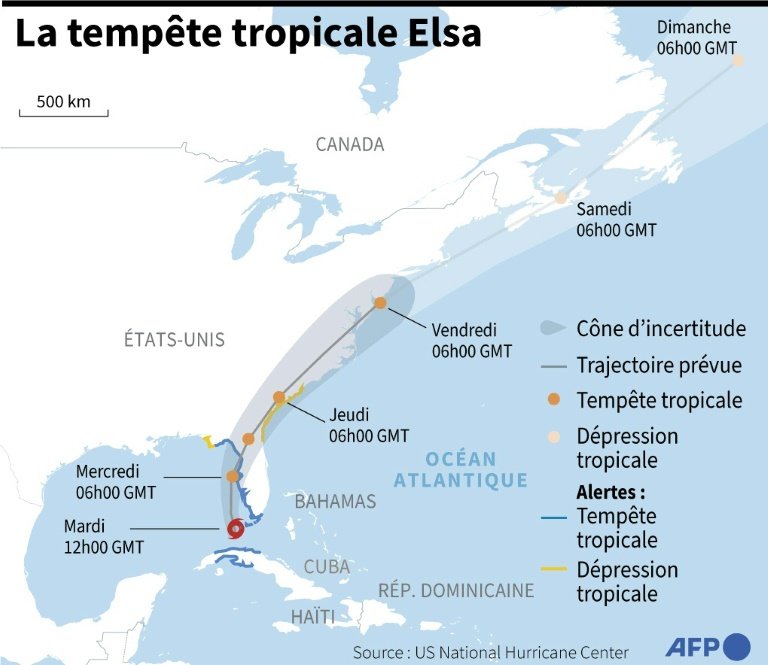 “If there are evacuation orders in your (residential) area, it’s for your own safety, the counties will open emergency shelters,” she added.

After killing three people in the Dominican Republic and St. Lucia, the storm hit Cuba on Monday, leaving torrential rains in its wake but not causing extensive damage to the island, as in Haiti, a country particularly prone to natural disasters.

Elsa had become the first hurricane of the season in the Atlantic Ocean, a Category 1 hurricane on Friday, then was downgraded on Saturday to a tropical storm after weakening, before being classified again as a hurricane on Tuesday.

Once she makes it to the west coast of Florida, Elsa is expected to lose some power as she travels inland to reach Georgia and the states of South and North Carolina.

The tropical storm’s passing comes less than two weeks after a building partially collapsed in Surfside, a small town north of Miami, at midnight on June 24.

The disaster left at least 36 people dead, 29 of whom have been identified and 109 missing, Miami-Dade County Mayor Daniela Levine Cava said Tuesday afternoon.

The remainder of the building, dubbed Champlain Towers South, was destroyed Sunday evening in a controlled explosion, as authorities fear the building is threatening the safety of lifeguards. The arrival of the storm reinforced these fears.

The clearance operations to find the victims continued throughout Tuesday, despite the rain and wind.

She said 200 rescuers searching relentlessly at the site were only stopped by lightning, which suspended operations for an hour.

Since the excavations began more than a week ago, more than two tons of rubble have been extracted from under the rubble.

Regarding the missing, the authorities were able to confirm that about 70 of them were in the building the night it collapsed.

“We know there may be people who have been in the building and no one has reported their identity,” Ms Levin Kava said, stressing that the police would “make sure who was and who was not in that building correctly.” .

By Scott Matthews 4 hours ago

A magnetic storm will hit Earth on Wednesday: the aurora borealis and slight disturbances expected

By Scott Matthews 12 hours ago

By Scott Matthews 20 hours ago

In the United States, the serious consequences of drying Lake Mead