Maori co-leader Roeri Waititi was expelled from the New Zealand Parliament on Wednesday for having committed “haka”.It is a challenging traditional Maori dance in protest against the “racist rhetoric and propaganda” of the opposition National Party.

For about two weeks the leader of the National Party said, Judith CollinsNew Zealand Prime Minister criticizes, Jacinda ArdernTo search for ways that indigenous peoples could better exercise their rights.

Collins claims, without evidence, that these attempts are part of a “separatist agenda”.

Tensions escalated on Wednesday when Maori leader Deby participated Ngarua-Packer asked Ardern whether he considered “the ongoing attacks against Maori to be racist.”, Referring to Collins.

Najariwa Baker’s question was banned by the Speaker of the House of Representatives, Trevor MallardWhat made it clear was this comment Out of the prime minister’s responsibility, Allowing Collins to continue the debate.

At the time, Waititi stood to denounce what he had heard in recent weeks “Racist propaganda” against the indigenous population Questioning Parliament to allow for ” Constant bombingOf insults The people of the country (A Maori expression to refer to the traditional owners of the land.)

The Speaker of the House, uncomfortable, asked him to sit down, but the Maori lawmaker made hakaFestive challenge dance.

After Mallard kicked him out of the session, Waititi, accompanied by Nagariwa Packer, said so “It is not true that the Speaker of Parliament does not have the courage to stop racism in the parliament, and it is not true that we support it.”, Depending Radio New Zealand. 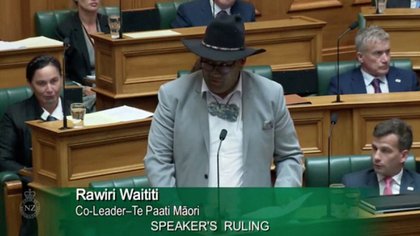 This is not the first time that Waititi has been expelled from the assembly, as in February also he was forced to leave the legislature in He refused to wear a tie on the grounds that it is not part of Maori dress code It is a colonial dress.

Maori make up about 850,000 of New Zealand’s population of 5 millionAlthough a large part of the population lives in poverty or suffers from financial insecurity, in addition to facing social problems.

(With information from EFE)