Air New Zealand announced in 2020 this very interesting project to install six full-length bedrooms, in economy class, on board the new Boeing 787 Dreamliner.

The concept is called Skynest and everything is lined up to see the light of day in 2024.

carrier has Entrusted it to CNN Travel Project details:

For now, we envision that a passenger who benefits from access to the concept will be limited to a four-hour session in a sleeper. This session will be offered to him at an additional cost compared to his Economy Class seat.

The airline has done a lot of research on sleep cycles. A typical sleep cycle is about 90 minutes long, so a four-hour session gives passengers a chance to relax, fall asleep, and wake up. »

The carrier also specified that bedding would be changed between each session. 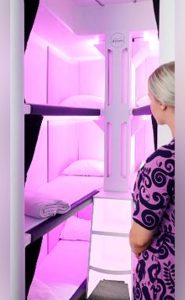 The interview also reveals that these berths will lie between the premium economy cabin and economy. Each dock will include a full-size pillow, mattress, earplugs, a reading light, a USB port and a ventilation socket.

The berths will be arranged superimposed, in two rows of three berths each.

The world’s longest flight: the original idea of ​​the concept

Remember that Air New Zealand has considered this concept because they are flying some of the longest flights on the planet. In September 2022, Air New Zealand will launch non-stop flights between Auckland and New York’s John F. Kennedy Airport. The flight duration will be 17 hours, which is the longest scheduled flight in the world.

These berths will provide a respite for passengers who are unable to sleep in a sitting position.

New Zealand: He stole a statue and drowned in freezing water

In New Zealand, Caledonians and Tahitians are back on the ski slopes